The Performer, the Object, and the Secret in Between

Cost: $600*
*Limited scholarships available upon request, BIPOC encouraged to apply. To request email info@chicagopuppetfest.org with a statement of interest/need

The training aims to explore the creative process and to offer participants tools to improve their own approach through the transmission of Yael Rasooly's research and creation method.

Participants in this workshop will be invited to embark on an intense creative and personal journey. Each artist will be encouraged and guided to develop their own short-form, connecting to the themes/stories/materials that hold a special significance and motivation. Tapping into this source of inspiration and impulse will be our point of departure and from there each artist will dive into creating their own unique form of theatrical expression and storytelling.

At the heart of our work will be the relationship of the performer/puppeteer with the object or puppet. We will be challenging this relationship, questioning its meaning, stretching its limits. Examining how this dynamic can lead the dramaturgy forward, echo multiple layers of thought and consciousness, and express precise emotion, all with minimalistic resources at hand.

We will begin by exploring objects and materials, developing sensitivity to the weight and meaning of objects, objects that contain memory, and those that are emotionally/socially/politically/historically/ charged. We will investigate the process of bringing to life the inanimate object through extremely different methods of manipulation, while at the same time revealing the character who inhibits each universe through precision of gesture, rhythm, repetition, focus point, energy level, breaking point, and metamorphosis.

Special attention will be given to the voice- in speaking but mostly in singing. As part of our everyday training, we will explore the powerful potential of combining the singing voice with manipulation of an object/ puppet, the secrets, and complexity that this can expose.

This workshop is an invitation to take a leap into a new chapter of your relationship with your own creation, your ability to dream, and to dare. To face together the familiar challenges of working on a solo show by putting to practice new tools in a safe and encouraging environment. This entails letting go of inner pressures and critics that no longer serve us in the creative process, such as the need to produce “successful” results. Instead, to actively accept that “getting lost” in the “unknown” is an invaluable and indispensable part of the creation process.
Our mission is to be open and receptive to the gems at our fingertips, that we collect and connect together in making an image, a scene, a performance.

Above all this workshop together is a time for PLAYING. We will be dancing, singing, writing, directing, designing, drawing, manipulating, and performing. We will be taking risks, failing, failing again, improvising, supporting each other to go beyond our perceived limitations, working quickly and intuitively while insisting on PLEASURE in the rehearsal space. In short, nothing less than an individual revolution, small or huge, towards a new voice that is ready to emerge.

* At the end of the workshop, there will be a presentation of the work methods and showing of the individual projects in process. 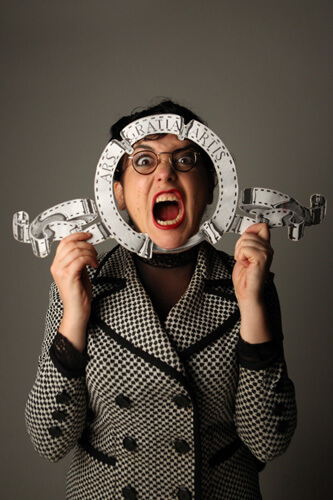 Yael Rasooly is a visual theatre director, actress, singer, and puppeteer. She was born in Jerusalem in 1983 and first trained in classical piano and singing before studying theatre in London at Central Saint Martin.

Her unique theatrical language, which she began to develop during her time at the School of Visual Theatre in Jerusalem, is based on a multidisciplinary approach, where all the elements of the staging have equal importance in the narrative. The relationship between the objects/materials and the performer are at the heart of her work, as well as the choices of scenography, sound, and music. Her visual universe makes what is usually silent heard, inviting the audience to travel into what is unspoken in our society. Examples of her creations include Paper Cut, a solo performance that received numerous awards; The House by the Lake, a musical cabaret for actresses, dolls, and objects, describing the story of three sisters in hiding during the Second World War; Bon Voyage, a co-production with the Festival Mondial des Théâtres de Marionnettes of Charleville-Mézières. Her latest creation, Un silence parfait, was presented for the first time at the 2021 Charleville Festival – it is the second part of a trilogy on violence against women and children.

Her creations have been performed in hundreds of festivals and theatres in more than 30 countries, have received numerous international awards (Grand Prix at the International Festival of Solo puppeteers (Lodz), the Excellence award for solo performance at the NYC Fringe Festival, and the Diploma of Excellence from U.N.I.M.A) and have been received by an enthusiastic press (Télérama, The Guardian and the NY TIMES). Having developed a growing taste for passing her experience and creative approach on to others, Yael Rasooly has led workshops and masterclasses in many institutions around the world. Her teaching method, combining stage direction, object theatre, puppetry, and vocal technique, is based on encouraging the participant(s) and aims to empower them in their individual and personal creation.