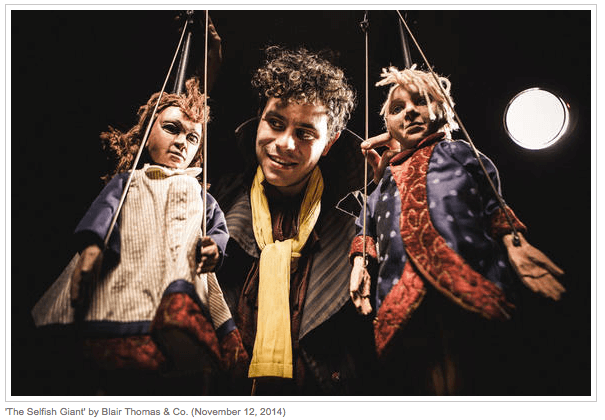 When people think of puppets, the crass, stringed characters from “Team America: World Police” may spring to mind, or the familiar felt faces of “Sesame Street” perhaps. Layered drawings manipulated live on overhead projecters or an electroacoustic sound show created with salvaged gadgets? Not so much. And yet, both acts are on the docket for the Chicago International Puppet Theater Festival starting this week, two of many examples of the surprising scope attendees can expect at the inaugural event.

The 12-day festival kicks off Wednesday, two years after Blair Thomas of Chicago puppet theater company Blair Thomas & Co. put wheels into motion to bring acts from around the world to Chicago—and showcase the puppetry community already thriving in a city better known for its dramatic plays and comedy. “There’s a really sophisticated dialogue of theater in Chicago, so I think this will be a rich addition to it,” Thomas said.

Aside from redefining puppetry for audiences as its own medium, Thomas and other fest creators hope the more than 50 shows being presented city-wide will help widen the lens with which most people view puppets and puppeteers.

“Most everybody has the innate ability to look at an object and assign a character and life to it. We all do it as kids and I think that some people just continue to do it,” said Mike Oleon, a puppeteer with Chicago’s Rough House theater company. “People think marionettes, or they think Muppets and they think kids’ shows, and it’s a lot broader than that.”

The fest’s schedule includes kid-friendly shows and adult fare; satire, adventure stories and dark, thought-provoking themes; as well as a symposium for puppeteers to exchange ideas with scholars in various fields. Oleon and puppeteer Taylor Bibat are curating “Nasty, Brutish & Short Presents … ,” an eight-night festival within the festival (Jan. 17-24) highlighting the work of Chicago-based or -bred puppeteers. New York’s David Commander will offer social commentary with his Modern Toy Theater at the Neo-Futurarium, using action figures and other toys to skewer materialism and foodie culture.

“I like that it recontextualizes something that we’re familiar with, something that’s iconic, like an action figure,” Commander said. “A lot of these toys I’ve actually had since childhood. I’m not really doing anything different than what I was doing when I was five years old playing with these toys; now I’m just doing it on stage.”

If the festival goes well, Thomas and other officials plan to expand its reach in years to come, inviting other Chicago performers to join and possibly incorporating school tours and additional museum events.

“If you haven’t experienced a piece of contemporary puppet theater, you will walk away being able to say, ‘I’ve never seen anything like that before in my life,’ because what is happening in the field is astounding and it’s not replicable in our popular media like television, film or the Internet,” Thomas said. “It’s something you have to be present to experience.” 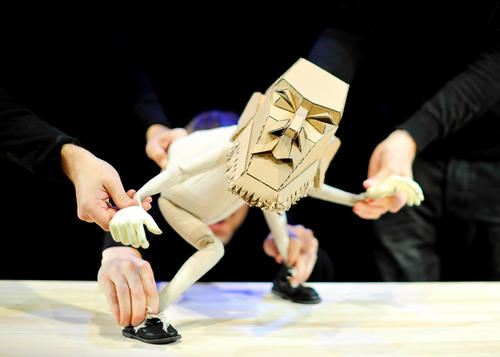 From Muppets to madness
Festival founder Blair Thomas weighs in on the spectrum of shows at the Chicago International Puppet Theater Festival, from traditional to totally out there.

>>Chinese Theatre Works shadow puppets, “Rich in Tradition” at The Field Museum
“There are no other shows that are going to be a single form.”

>>Blind Summit, “The Table” Upstairs at Chicago Shakespeare Theater (pictured above)
“[The] company is doing a single Bunraku puppet performance. Bunraku is a 400-year-old tradition, but what they’re doing with it is very non-traditional.”

>>Blair Thomas & Co., “The Selfish Giant” at the Ruth Page Center for the Arts
“It’s got some rod marionette and some costumed puppet pieces in it and that becomes traditional in a sense, but because it’s a mash-up it becomes non-traditional.”

>>Laurent Bigot, “Le Petit Cirque (The Little Circus)” at Vittum Theater
“Bigot, who is performing a sound piece with objects that make noise and contact microphones, [is] also very non-traditional.”
On puppets’ “creepy” rep
“The scary aspect for some puppets is absolutely there and, when harnessed, can be used very effectively. That said, there are so many other kinds of gentle or lovable or quirky puppets [too] …” —puppeteer Mike Oleon on some puppets’ reputation for being creepy

>>Sandglass Theater, “D-Generation: An Exaltation of Larks” at The Dance Center of Columbia College
“They’re pioneers of adult puppet theater and they do really cool stuff, [with] really beautiful objects and very thought-provoking storytelling,” Oleon said.