CHICAGO — A shop vacuum became a lover; suction was involved. Feet turned into faces. A great fanged creature appeared with a man inside. Ghostly villagers assembled, silent and wreathed with smoke as their buildings burned and burned.

It was a puppet invasion — all part of the 11-day Chicago International Puppet Theater Festival — and the latest proof that puppetry, a delicate and mysterious art so often restricted in this country to the children’s table, or relegated to fringe productions, has claimed a spot closer to the center. In an age when we seek relief from the relentless barrage of technology, this low-fi, handmade form provides it. 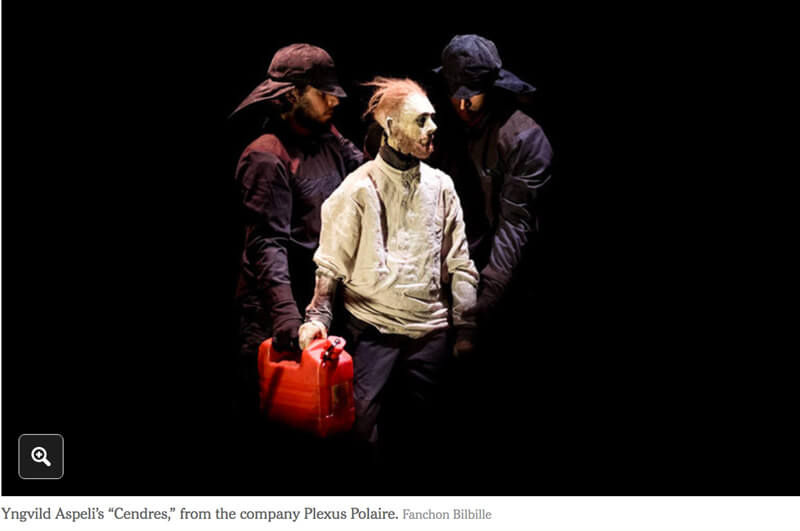 A city where the dominant stage aesthetic for years was a kind of red-meat realism — think Steppenwolf Theater Company, which unleashed John Malkovich on the world — might not seem to be a place where puppetry would flourish. Yet the very existence of last month’s festival, and the eagerness with which dozens of institutions across Chicago have embraced it since its start in 2015, is emblematic of a development long in the making on American stages.

It’s not so much that puppetry is having an evanescent moment as that it has reached critical mass and settled in, cherished by grown-up audiences raised on “Sesame Street” and “The Muppet Show” who have had their hunger stoked by landmark puppet productions on Broadway: “The Lion King,” “Avenue Q,” “War Horse,” with its magnificent steeds.

If, in theater — as in opera and dance, where it has also been making inroads — puppetry most often plays a supporting rather than starring role, it has a much greater presence than it once did. 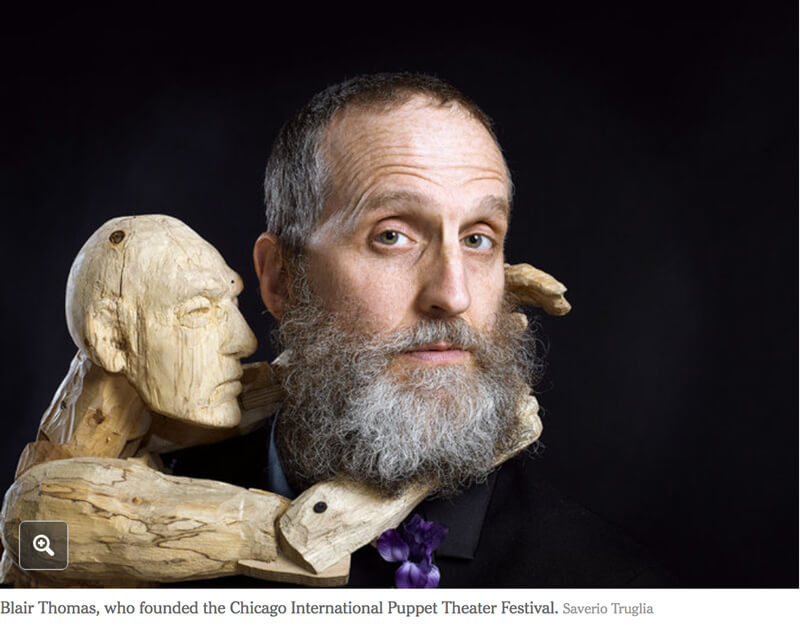 “Infiltration is welcome,” said the puppeteer Blair Thomas, the festival’s founder and artistic director, who made a dog puppet for Patti LuPone’s character in the Broadway-bound musical “War Paint” when it ran in Chicago last summer. “The doors have been opened.”

And the puppets are marching right through.

Catching Up With the World

You can see the shift in The New York Times, with mention of puppets now commonplace in theater reviews. But then, New York is the puppetry capital of America, where boundary-pushing directors like Lee Breuer and Julie Taymor have spent decades harnessing that hybrid art — part visual, part performance — to create fantastical worlds heavily influenced by foreign traditions.

The best shows I saw over a weekend at the Chicago festival did come from other countries. One was the Norwegian director Yngvild Aspeli’s “Cendres,” a haunted, mesmerizing piece about arson and internal torment, full of life-size puppets and miniature blazing buildings, from the French-Norwegian company Plexus Polaire. Unfortunately for American audiences, it has already headed back to Europe.

The other was “Chiflón, El Silencio del Carbón” (“Chiflón, Silence of the Coal”), by the Chilean collective Silencio Blanco, whose artists manipulate sublimely crude-looking puppets with tender precision to tell a wordless story of coal mining, set partly deep beneath the earth. That production, which continues its United States tour through early March, will stop in New York this month.

But the abundant homegrown puppetry in “Mr. and Mrs. Pennyworth,” a nouveau-Victorian play by Doug Hara at Lookingglass Theater Company, was on par with those imports — both the shadow puppetry by the young Chicago collective Manual Cinema, which has won raves in its recent forays to New York, and a menagerie of gorgeous beasts (a cuddly pig, a shaggy wolf, an enormous boar) by Mr. Thomas, who built them all in his Wisconsin barn.

Exposing Chicago artists to international work is part of the impetus for the festival. Mr. Thomas, 54, intends to fill some of the void left by the Henson International Festival of Puppet Theater, which ran in New York from 1992 to 2000, and the International Theater Festival of Chicago, which in the late 1980s ignited his love of puppetry with a visit from a Barcelona company. That event changed Chicago, Mr. Thomas said, by showing artists and audiences what the standard was elsewhere. 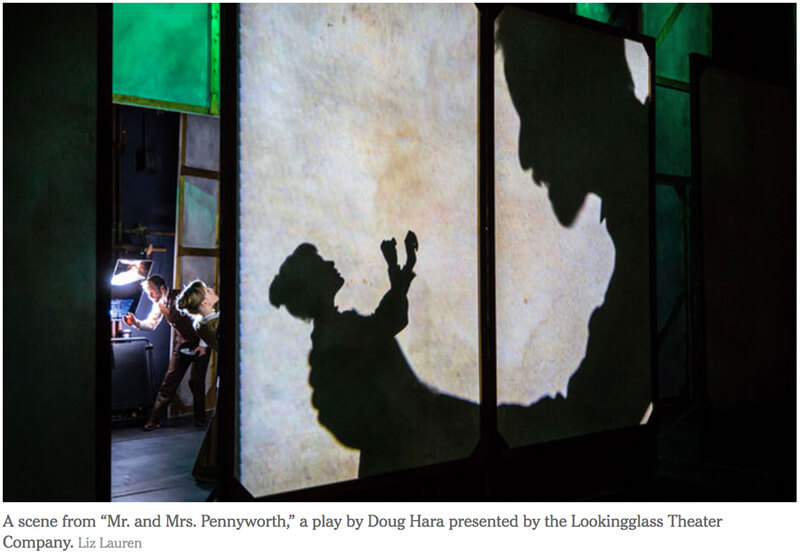 He laments the advantage that European puppet artists have in the sheer opportunities for their productions to be staged. But Cheryl Henson — a daughter of the Muppets’ creator, Jim Henson, and the president of the Jim Henson Foundation, a major force in contemporary puppet theater — said that American puppeteers had caught up to the European standard of the craft.

“They’re not second-class anymore,” she said from Britain, where she was attending the London International Mime Festival, which routinely also includes puppetry.

On my Sunday morning in Chicago, I went to the Instituto Cervantes for a children’s show by the Italian company Teatro dei Piedi and watched Veronica Gonzalez, a virtuoso of the form, create a succession of joyous vignettes starring puppets made from her own costumed feet. It is astonishing how expressive toes can be.

I was the age of the children in that audience when my own love of puppetry was nurtured by “Sesame Street,” though I hadn’t thought much about it until an exhibition of the show’s Muppets two years ago at the New York Public Library for the Performing Arts. I was surprised at how moved I was to see the Count. And when, in a corner at the back of the gallery, I spotted the bashful Mr. Snuffleupagus, it was like coming upon a mythical creature.

Still, my enduring fondness is nothing compared with the childhood fandom that Sarah Fornace, one of the artistic directors of Manual Cinema, described: a devotion to the Muppets — and to Jim Henson movies like “The Dark Crystal” (1982) and “Labyrinth” (1986) — so impassioned that in eighth grade she wrote a report about her ambition to be a Muppeteer.

“All of that was really important to my cultural identity growing up,” she said.

Now 31, she has worked at Redmoon Theater, which Mr. Thomas co-founded, and has been a member of his troupe Blair Thomas & Co. She extolled the Chicago scene, noting “a plethora of young companies who either explicitly do puppetry” or use puppetry and object work “to create moments of spectacle” and effects that aren’t possible to achieve onstage with human bodies. 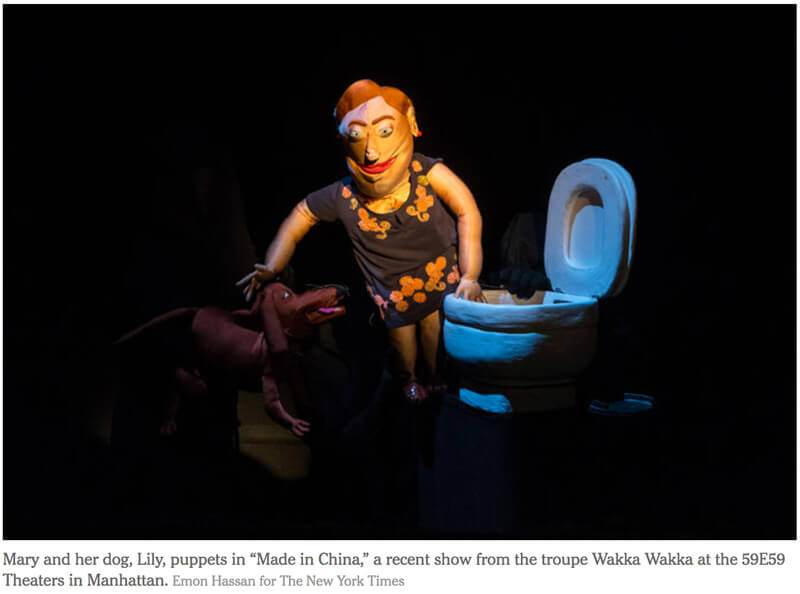 That defiance of realism, of course, is part of puppets’ potency. The figures embrace metaphor, and we fill in the blanks with our willingness to believe.

The night before I flew to Chicago, I went to Wakka Wakka’s “Made in China” at 59E59 Theaters. It’s a puppet show aimed at grown-ups (there’s puppet nudity almost immediately), but I was surprised anyway as I looked at the crowd. Nearly everyone was middle-aged or older, normal for a Midtown Manhattan theater but still surprising for a production of pure puppetry: no actors, just puppets and puppeteers.

Pure puppetry is the ideal for people in the puppet world. That is the sticking point in any argument about the art form being on the rise because, however many gains it makes inside other disciplines, puppets are rarely the point of the show. One exception on the horizon: “Top Puppet,” a reality competition special that NBC recently ordered from the Jim Henson Company and a producer of “The Voice.”

Ms. Henson did point out, though, that more artists are working in the form these days, and that, thanks to “Avenue Q” and “War Horse,” many actors have gained experience as puppeteers. (She also named the top American cities for puppet theater after New York: Atlanta, Chicago and Minneapolis.)

Last year, when the Henson Foundation raised its grant levels, applications rose about 80 percent. Meanwhile, Ms. Henson said, puppeteers have a better shot at getting financial support from general arts funders and at being included in performance festivals than they used to.

All of that suggests a heightened respect and a sturdier infrastructure, as does the 2015 MacArthur Fellowship for the puppeteer Basil Twist — who, Ms. Henson noted, “is doing the Oompa-Loompas” for this spring’s Broadway production of “Charlie and the Chocolate Factory.” 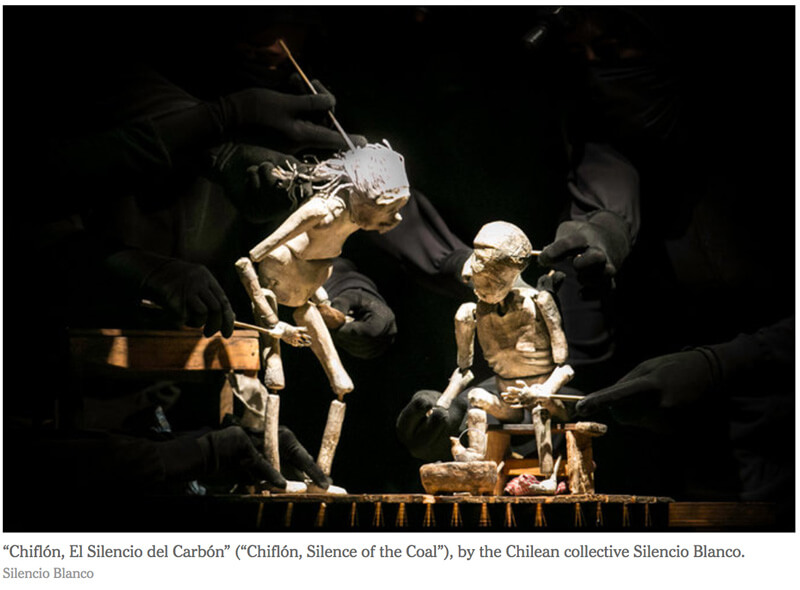 Back in New York, I called Mr. Twist, who runs the Dream Music Puppetry program at Here, where “Chiflón” will be performed. He regards the prominence of puppetry in theater today as temporary.

But he did acknowledge “a cumulative effect” of “The Lion King,” “Avenue Q,” “War Horse” and the Henson festival in shaping public perception — persuading adults that puppetry isn’t just kid stuff. “‘Made in China’ could not have played in the same way 25 years ago,” he said.

Mr. Twist, 47, talked about his preference for pure puppetry — a mismatch, he knows, with his many collaborative forays into theater and dance. Then he told me there was an exhibition I needed to see: “The Theater of Robert Anton,” running until Saturday, Feb. 11, at an Upper East Side gallery called Broadway 1602.

When I went there, I ran into Mr. Twist, who cheerfully showed me around, filling me in on Mr. Anton, an avant-garde puppeteer who died in 1984. Mr. Anton’s puppets, some of which Mr. Twist lent to the show, are tiny objects with minutely detailed faces — one evidently modeled on Ellen Stewart, the founder of La MaMa, where Mr. Anton did much of his work.

Mr. Anton performed his puppet plays for no more than 18 people at once and did not allow them to be filmed or photographed. His art is the purest of pure, and there is something sacred and beautiful about it. But also, in its hermeticism, a tinge of sadness.

Because in Mr. Anton’s time, in America, puppetry for grown-ups wasn’t on the margins entirely by choice. There wasn’t much call for it center stage.

“Puppetry’s kind of an underdog,” Mr. Thomas told me. “We’ve always existed on the periphery of the dominant culture. In some ways that’s our strength.”

Is it, though? Not everything has to be a popular art. Not everything can be. But sophisticated puppetry appears to be moving swiftly in that direction. So far, it’s gaining power as it goes.

A version of this article appears in print on February 5, 2017, on Page AR7 of the New York edition with the headline: Puppetry Has Its Moment at Hand. Order Reprints  I  View Online