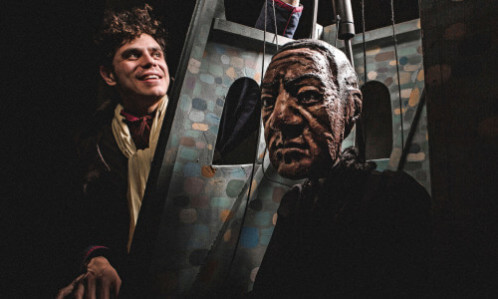 “The Selfish Giant” is part of a great line-up of shows at the Chicago International Festival of Puppet Theatre, which begins this week in Chicago, Illinois (photo: Joe Mazza).

Krista Dalby shares her experience with Puppets Without Borders in Cambodia.

The puppetry community is among the millions around the world protesting and showing solidarity after this week’s terrorist attacks in France.

UNIMA has issued a statement rejecting all forms of violence and terror.

Scotland is getting ready for the 2015 Manipulate Festival in late January.

Step inside the personal space of puppeteer and Downton Abby actor Jeremy Swift.

Penny Francis shares the history of The Puppet Centre in the 1990s.

A look at the Louisville puppetry company, The Squallis Puppeteers.

Puppets made by sisters Jeanne Bunch and Judy Pitts send missionaries to India.

Asbury Memorial Theatre is looking for American puppeteers in Savannah, Georgia for a biographical musical based on the life of P.T. Barnum.

Proposals to perform at the first ever Festival Internacional de Títeres Leovigildo y Angelito in Bogota, Columbia are now being accepted (link goes to a Spanish language web site).

Norman Schneider is teaching puppet building workshops in Germany throughout the year.