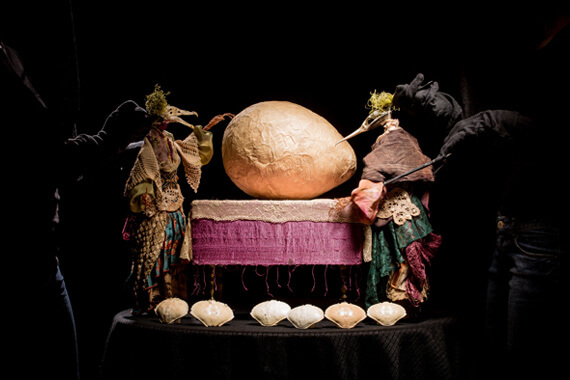 The inaugural edition of the Chicago International Puppet Theater Festival began Wednesday evening with “Mariposa Nocturne: A Puppet Triptych,” a beguiling work by Chicago’s Stephanie Diaz and Company. Presented in cooperation with Free Street Theatre, it was staged in the intimate, ragtag third floor theater space of the Pulaski Park Fieldhouse.

Diaz’s work (stage primarily on a large table), was an ideal choice for the festival opener for many reasons. Not only did it capture the spirit of the Latino community from which it emerged, but it explored a great variety of contemporary puppet theater techniques, incorporating everything from Japanese bunraku style work (in which exquisitely handcrafted puppets are manipulated by puppeteers cloaked in black), to shadow puppets, video animation and live actors. The “theater” aspect of it all began with an elaborate lobby installation that had the audience walking past mood-setting shrines similar to those created for the Mexican Day of the Dead.

In fact, a masked figure of Death (Miguel Nunez) moves through the story, eventually replaced by his puppet alter ego who seats himself at the bedside of the puppet of a very old woman. The way he sits — with his red cape draped over the back of his chair with a flourish — was just one brilliant indication of how expressive puppets can be, and it elicited a laugh any human actor would be thrilled to receive. (Later, when a puppet reaches for a tiny can of beer, there are more laughs.)

That first scene, “El Sueno” (“The Dream”), is followed by “Las Soleteronas (“The Chaperones”), and it’s a beauty. Featured are two elaborately dressed older women, with wiry hands, strawlike hair and long, thin, beaky noses. They find themselves the custodians of a large, glowing egg that, we discover, holds the soul of the old woman. The spinsters are both hilarious and touching, and their every gesture and move reveals their personalities.

In the show’s final scene, “El Carruaje” (“The Carriage”), a large lacy tablecloth that might have belonged to the spinsters is hung as a projection screen, and a video follows the journey of an antique wicker baby carriage as it wheels itself to a cemetery. Various creatures, including a hyperactive crab and a large goldfish, also are part of the story, and while it is not always easy to connect the dots here, the magic is enough.

Diaz’s puppets are so expressive you forget they are not human. The puppeteers (Diaz, Hannah Bennett , Jessica Mondres, Jazmin Corona (along with Laureana Martinez and Izzy Strazzabosco, two impressive young neophytes from the Free Street Youth Ensemble), worked seamlessly together, with music by Barry Bennett enhancing the mood.