Puppets are the ambassadors of the obscure and the uncanny. The history of the art form is “easier researched in police records than in theater chronicles” according to Peter Schumann, founder of the Bread and Puppet Theater, an entertainment forever mired in “its own secret and demeaning stature.”

Puppets are by definition low-tech: if there isn’t a person with his hand up that sock, or manipulating those strings, or running the show somewhere, then it isn’t really a puppet, it’s a doll or a robot.

This odd subcellar of culture, part sculpture, part folk art, part vaudeville, also has personal appeal to me. There is a kinship between journalism and puppetry. Both require dedicated craftsmen, albeit in dwindling numbers, practicing a profession that neither thrives nor vanishes, but somehow remains perpetually defunct. Both are rough simulacra of life; both had some legendary moment in the cultural spotlight in the hazy past—Hayden composed puppet operas for the royal court, a popular puppet dinner theater was steps off Michigan Avenue—but now linger on in the margins, practiced by various oddballs and misfits. I’ve never told anybody who asks me what I do for a living that I’m a puppeteer, but were I to, I’m certain it would be met with the exact same blank look. mixing pity and indifference, that “newspaper columnist” elicits.

My take on puppets wasn’t always so complicated. When I first joined the paper, puppets were merely the kind of marginality that caught my interest. I would flip through the phone book, looking for strange subjects to write about. A scribe. Chicago’s last coal hauler. I was entranced that there was a Chicago Puppetry Guild, and a number of puppet theaters, which led to this article 20 years ago. I didn’t even have any kids yet.

On Wednesday, the Chicago International Puppet Theater Festival kicks off in Chicago. And while theatrical puppetry has an airiness that I generally shun—I’d rather see a “Punch and Judy” show on a portable stage in a public park than “Oedipus Rex” performed by marionettes at the Goodman—I thought I would dub this week “Puppetry Week” on EGDD and feature a puppetry-related post every day for the next seven days. I will talk to the festival’s founder, attend what events I can, publishing new stories and photos and reprinting old articles written over the years about Chicago puppetry.

I’ll also remind you of recent puppet posts, such as my visit to the deeply-strange Vent Haven Museum in Fort Mitchell, Kentucky over the summer.

And for those who just can’t bear the prospect of that much puppetry, I won’t neglect the non-puppeting world: Monday’s column from the Sun-Times will be posted here at 12 noon, and each afternoon of Puppetry Week, I’ll make sure there is an update from elsewhere. But at least give the puppet stuff a nibble. It’s a surprisingly compelling realm, or so I’ve long thought.

As always, thanks for bearing with me. 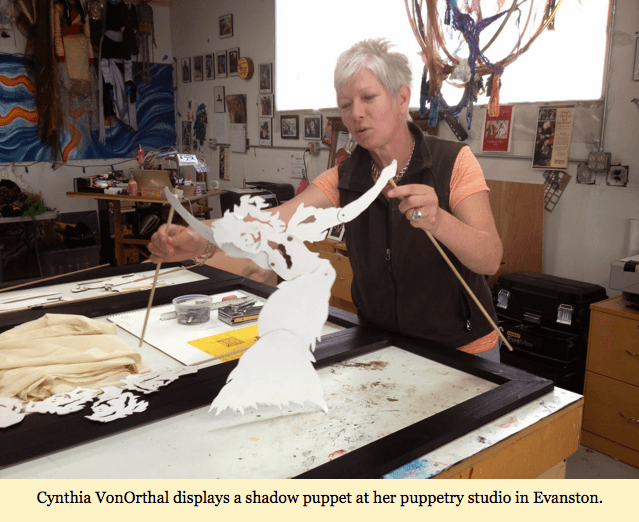 You’ve probably never seen one of Dave Herzog’s marionettes take a bow. It does not snap forward at the waist, jerkily, the way the adjective “puppetlike” would suggest.

Rather, the bow is a graceful sweep downward, head inclined just so, with one hand fluttering modestly in the vicinity of the mouth, the other trailing behind, arched, a bit of suppressed theatricality.

Many might be surprised to still find puppets at all – bowing, juggling, leaping, dancing – in the small AnimArt Puppet Theater on North Kedzie, one of half a dozen puppet theaters and troupes making a living in Chicago.

The puppets, today a circus of mice, go through their paces in front of 60 squealing, delighted schoolchildren who, despite the deadening impact of video games and VCRs and cable television, still enjoy this ancient entertainment.
“Puppetry is probably the oldest theatrical art form in the world,” said Herzog, also is president of the 75-member Chicagoland Puppetry Guild. “There is not any culture in the world, any race of people that does not have a form of puppetry.”
The children are first- and second-graders, prime age for most puppet audiences.

“The performance window is getting much smaller; by the time they are 9, 10 years old, they have been exposed to so much high-tech entertainment that anything requiring the use of imagination has less appeal to them,” said Herzog. “Puppets are not high-tech.”

Yet puppetry is not just for children. The first thing a puppeteer will tell you – after explaining that, no, these puppets are not store-bought, they are meticulously handcrafted – is that puppetry is an art that can be enjoyed by adults.

Bill Henderson, president of AnimArt, is working on the production of an evening of Becket plays. He admits that the notion of puppetry as kiddie entertainment is difficult to overcome.

“I once did a production of Ibsen’s `Peer Gynt,’ and people would call up wanting to bring their children,” he said. “I would tell them that the opening scene is a rape, that there is full frontal nudity, and they would say: `It’s a puppet show; I’m bringing my kids.’ ”

The very adult taste of opera is the sole repertoire of William Fosser’s “Opera in Focus,” a lush production of fantastically detailed puppets acting out famous operas on a splendid guilded stage.

Fosser was once artistic director of the Kungsholm Miniature Grande Opera, which Chicagoans of a certain age will remember as having once occupied the space where Lawry’s restaurant is today. Kungsholm closed in 1971, and Fosser went on to a career in movie set design, on such films as “The Sting” and “Home Alone.” But after retiring from the movie business he revived the puppet opera, which has now found a home, a bit incongruously, in the basement of the Park District building in Rolling Meadows.

After each performance, Fosser leads the audience backstage, where elaborate Egyptian costumes from “Aida” wait on tiny mannequins, and sets from “La Boheme” are protected by custom-made twill dust covers.

“I’m interested in their realizing this is an art form, and what goes into it,” said Fosser, 65. “Some say the trip backstage is as exciting as the performance.”

A puppet endures a lot of wear and tear – once, during “Lohengrin,” the swan’s head fell off in mid-performance. Constant maintenance is essential.

Before an afternoon practice run-through of “Faust,”

“That way,” he explains, evenly, lest his hand shake, “when the light catches her just right, people swear the lips move.”

As much as Herzog, Henderson, Fosser and Guerra have to scrape by to make a living, they are the puppetry elite in the sense that they have permanent spaces to perform.

The majority of puppeteers are like Steven Finnegan, traveling to birthday parties, church picnics and senior centers.

“It’s a dying breed. If I had to just make my living as a puppeteer I probably couldn’t do it,” said Finnegan, 45. “I’m also a clown.”

Finnegan said he wished that parents looking to entertain their children would consider puppets, instead of automatically turning to magiciaxxns and clowns.

“Think about clowns,” said Finnegan. “There are a zillion clowns and all of them work. I know a guy who charges $120 to bounce around in a Barney costume. I come in, set up a theater and a sound system and do a full production for 45 minutes – a much better entertainment value – and I can only charge $135 for a birthday party.”