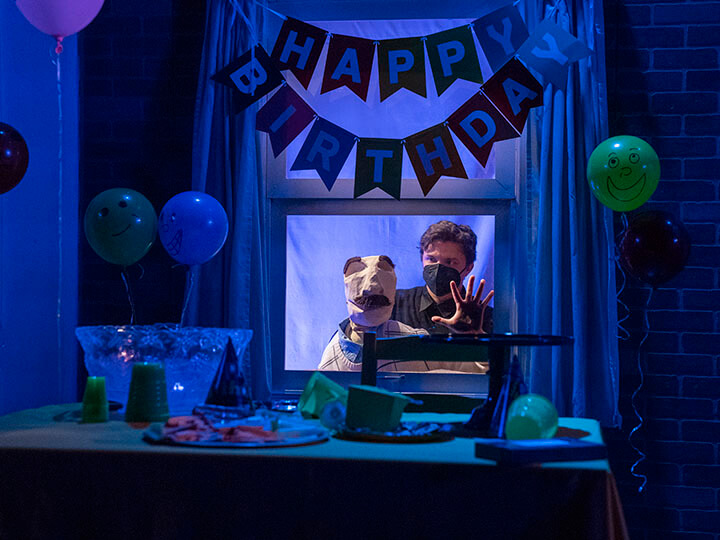 The streamers are strung, the punch has been spiked, and the cake is just waiting to be eaten. Now all Bill has to do is wait for his guests to arrive. But waiting is hard. RSVP now for Bills’ 44th, an original comedy by Brooklyn-based artists Andy Manjuck and Dorothy James, two puppeteers who together create one very worried protagonist. Many styles of puppetry, raucous balloons, and a cheeky piece of crudité all collide in this “poignant, comic puppet play…as much about the ingenuity of the mind as it is about loneliness.” (New York Times Critic’s Pick)

With special support from Cheryl Henson

Dorothy James (co-creator and puppeteer) is a Brooklyn-based puppeteer, educator, and maker of tiny things. She’s performed with Basil Twist (Hansel & Gretel, Michigan Opera Theatre), Wakka Wakka (Made In China, The Immortal Jellyfish Girl), the Columbus Symphony Orchestra (Petrushka, Giants Are Small), the Rockettes (The New York Spectacular, Radio City), and is a puppeteer for the new children’s series Moon and Me (BBC, Andrew Davenport). Her work has also been seen at the Kennedy Center, Arena Stage, the Jim Henson Carriage House, St. Ann’s Warehouse, 59E59, Dixon Place, La MaMa, and overseas in Norway and the Czech Republic. She is co-creator/intern of the Late Night Puppet Talk Show With Special Guest, a 100% live, 100% improvised puppet catastrophe on twitch.tv/talkpuppet2me. dorothy-james.com